Who’s most likely to live in a food desert?

Through the GRC process, I am learning that it is impossible to take students through a process to activate and transform their thinking and not be transformed in the process.

I am also learning that just like sometimes history is skewed to make subjective information factual among society; likewise, issues that affect society are skewed as factual with information that is subjective.

In researching food deserts, the issue is often termed as a rich vs poor issue. It is a fact that mostly low income and minority, largely African American communities have little to no, direct access to affordable healthy food.

However, the issue that my students’ and I find most prevalent in fighting food deserts is the lack of education of what foods are unhealthy vs. healthy and why? This issue crosses socioeconomic lines and is a major contributing factor to this issue.

This problem crosses the lines of rich or poor and is killing our country as a whole.

Second as a teacher of mostly low income, minority, largely African American and Hispanic students, I do not want them to think of themselves as “poor.”

I bring up this issue because during the latest round of the GRC process a community panelist asked one of my students’, “What kind of people usually live in food deserts?” The judge expected my student to say “poor” people and even suggested that we cover this more in class. We have in fact discussed the issue of distance, inaccessibility and lack of options in our communities during class. However, the issue is better framed as one of the educated vs. the uneducated. If you are educated you can make better choices and make creative decisions on how best to nourish yourself and your family with the resources that are available. With an education on the health benefits of living foods and its importance there will also be a desire to work and mobilize to create the resources needed, such as gardens, community co-ops, farmers markets and grocery stores. 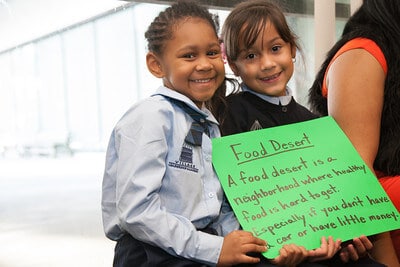 In taking my students through a transformative process to become agents of change, I want to be careful not to impart them subjective ideas that can be challenged with research as to their truth. Thus our grassroots campaign project goals around educating our community about the importance of healthy food was born!

To reinforce the power of education regarding healthy vs. unhealthy foods, the first step to activate our grassroots campaign is to create advertisements around our school community at VLA with pictures and descriptions of real food vs. processed food. During a visit from a chef at the Healthy Food Hub, students were shocked to learn that hot chips were not considered a real food and had no nutritional value. They were so shocked that they wanted to go home and tell their parents to stop buying it! To further model, healthy eating habits for the remainder of the year students have pledged to bring in only healthy snacks for lunch.

As the weather breaks, our class will lead efforts to revitalize our school garden for the Spring. To culminate our grassroots campaign, we are partnering with the Healthy Food Hub to do a Farmer’s Market in the Lobby of VLA featuring some vegetables from our garden and many of the fruits and vegetables from our Fresh Fruit and Vegetable Program.

Initially, taking on the topic of food deserts seemed lofty for a 1st grade class, especially after the bevy of questions that came out of Steps II and I. I honestly didn’t know where to begin and felt overwhelmed. However, as we continued to do our research watching videos, reading articles and listening to experts the next steps were revealed and I began to feel empowered and so did my students. I am really looking forward to seeing how the campaign unfolds and how our school community will be affected as a result of my student’s efforts.